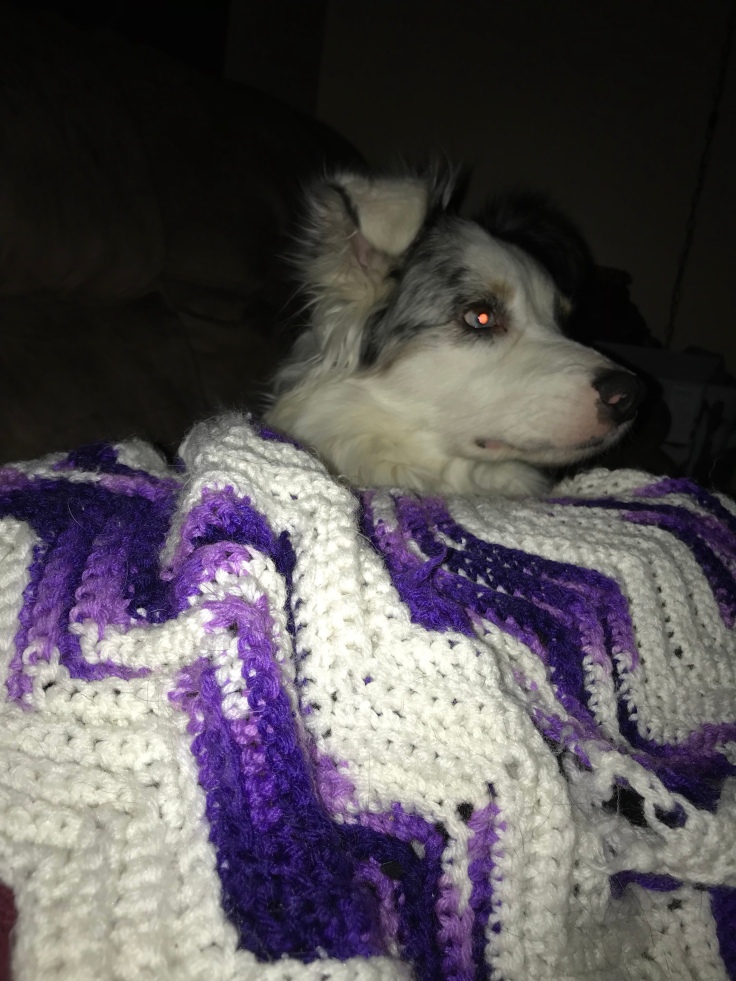 Today is a special day. I have no children. Human ones anyways. I have fur babies. Two of them. Zoe, my Standardbred mare, that I have talked about previously in my posts about barn time. Then, there’s Bennett…

… Bennett is the reason today is special. It’s his fourth birthday! My dad made fun of me because I made Bennett, Gypsy, and Cheech (the last two being my dad’s dog and one belonging to my nieces and nephews that lives at my house) pupcakes to celebrate Bennett’s big day. He also got presents- new toys. Picture of the pupcakes:

So, why am I writing a post about that of my fur child? Animals are amazing. Dogs are absolutely the best form of companion. I know there are cat people and dog people. I love cats. I do. We had cats- Timmy and Pookie were the absolute best. Timmy thought he was a dog and would walk us to and from the bus stop during the school year while my sisters and I were growing up. So, I will give cats their credit, but… but there is something about a dog that steals your heart. They are good for the soul.

And they are equally as good for the mind. This last sentence. Yeah, that’s what the rambling above was leading to. Sorry. Not sorry. I can’t speak for everyone. I can only speak for myself about the importance of having my four-legged shadow.

My last dog, Yero, I couldn’t keep because he was so overly protective that he tried to bite someone just for walking near me. I had only had him a few months. Before that, however, my cold nosed, long time friend was Friskie. Grandma Lucy got him for me when I was just 8. I looked and looked for a dog (my dream was to own a collie) before she suggested we look at a little 9 week old puppy behind the counter at the Animal Protective League. Friskie, a Shepherd/Husky mix, came home with me; and stayed there until the ripe old age of 17. You did read that right. My parents had him humanely put to rest when I was 24- I had refused to discuss the option because the idea of losing him was beyond… Looking back, I know that it should have been done long before they made the decision for me…

And while I loved Yero, Friskie was always present in my head. He still is. I was sad over having to give Yero up, but looking back… Using him as simply a replacement because I missed having a dog to cuddle with at night wasn’t quite fair to him. Moving on…

It took a long time before I actually wanted another dog of my own. I decided that I was going to buy from a breeder this time because I wanted to have the dog trained and registered as a Psychiatric Service Dog (this is currently a work in progress). Rescues can make amazing dogs for these type of jobs, but felt it was best to go with a breeder this time. Can you guess the first breed I wanted to look at? You got it- a collie. My friend, Diana, does agility and spoke with some ladies about the breed and a breeder. They told her that the breed can have health issues due to overbreeding, but that I should look at the Golden Retriever or Australian Shepherd. I love Diana’s Goldens, but love the multicolored coats on dogs, so I started looking into the Aussie.

I found my breeder, Carol, right over the Pennsylvania boarder after calling a few others. Carol answered all the questions I had AND had just had a litter of pups. My sister was going to go with me to see them on Monday, but Diana said she’d go with me on Saturday so that I didn’t take the chance of the puppies being spoken for. So, we left Saturday morning on the hour and a half trip there and back.

It was a good thing she went because she knew questions to ask that I never would have thought. Carol showed us the litter. One word: ADORABLE!! She showed us some of the wee ones and then found my boy. He was hidden under his mom’s paw. She explained that he was the runt of the litter. He wasn’t progressing like his brothers and sister; and she was worried about him. He had too much white for showing and that would deter people from him. Diana told her the fact that he was the runt and was having a rough go would only make me love him more. I chose him that day. Or he chose me. Maybe both. Carol had sent me pictures two days later of him eating his raw food (which he hadn’t been willing to before)!

Diana wanted me to name him Baxter. I decided on Bennett. Named after Jane Austen’s Elizabeth BENNETT and one of the last characters played by Katharine Hepburn (Marion BENNETT).

It was a LONG six weeks before I was able to bring him home. Carol had said she might need to keep him a little longer, but my boy was ready for me to bring home on March 15th. My sister, Heather, and niece, Bella, went with me to pick him up. Carol went to let all of the puppies out to go to the bathroom so that Bennett could go before we left to drive home. He REFUSED to go. He sat at my feet while I filled out the paperwork with Carol as if to say, “She’s mine. I’m going with her.” Maybe he was even saying “She needs me.” It was the best day for me in so very long… Even if he threw up on me in the car on the way home.

Bennett seemed to know his job right from the word go. He has ALWAYS been hyper. Being a herding breed has aided in that. If given the choice, however, he would usually rather sit by my feet or lay with me on the couch, or wherever, any day of the week. The dog is attached to me like glue. Unless the kiddos are over. Then he’s only attached to me like Duct Tape, ha ha.

My dad calls him a moron because he’s willing to tolerate anything and everything from people. He’s not dumb. He’s easy going. He does take everything from the kids. Those are HIS kids as far as he’s concerned. My dad messes with him all the time. Bennett loves every minute. As far as his eating the plunger… he was a puppy. That is his line of defense.

Bennett is so very good at what I need him to do for me. Even whenI don’t know that I need it or get upset at him for simply doing his job.

When I was in the grips of my last horrible depressive episode, he was on the couch with me because I couldn’t move from it. He went outside only when he absolutely had to; and Bennett barely left my side long enough to simply eat. When I self-harm, Bennett is at my feet. The only time his herding instinct really shows. He sits on my feet, circles my legs continually closer, and finally jumps on me to attempt getting my attention. This routine will continue until I stop what it is that is injuring his mom. When I’m manic or seriously anxious, he barks less. I can’t handle sound and he seems to see the signs before the episodes even take hold of me. He’ll FORCE me to pet him. I’ll just want to curl in a ball and not move because I am literally uncomfortable in my own skin and he will constantly insist on nudging his nose under my hand until it is resting on his head. Whether depressed, manic, anxious, or in the grips of OCD, he knows something is wrong and leaves my side even less than he normally does (which is barely ever).

I can’t speak for everyone. I can only speak for myself on the importance of having my ever present, furry wall of support and love. Like I said up top, Bennett has always seemed to know his job. He has just gotten better with it as he has aged. And he’s only four as of today.

I know that not everyone is an animal lover. I honestly can’t understand the people that aren’t, but to each their own. I can say that I’ve seen animals calm individuals with dementia, children with anxiety. My nephew has Sensory Processing Disorder and I can’t tell you how amazing it is to go into our favorite bookstore, and no matter how bad his SPD is that day, him being able to handle however long we’re there because of the store’s cat, Otis. Animals have special powers. I’m convinced.

Bennett is a God send. There are days he makes me crazy because he can be like having a toddler, but I wouldn’t trade him for the world. We are going to be FINALLY attending obedience training classes (at the new center opening two miles from my house) since we will be able to get to them. We’re also going to do Agility I think. Eventually.

Oh! There is something he is SO not good at when it comes to my mental illness… When I’m manic and can’t sleep, he is a horrible companion at night! He has no problem coming up next to me and just going to sleep with his head on my lap while I attempt to stay occupied. Does he even attempt to stay awake to keep me company? Yeah… no. I guess that one little thing I can let him off the hook with.