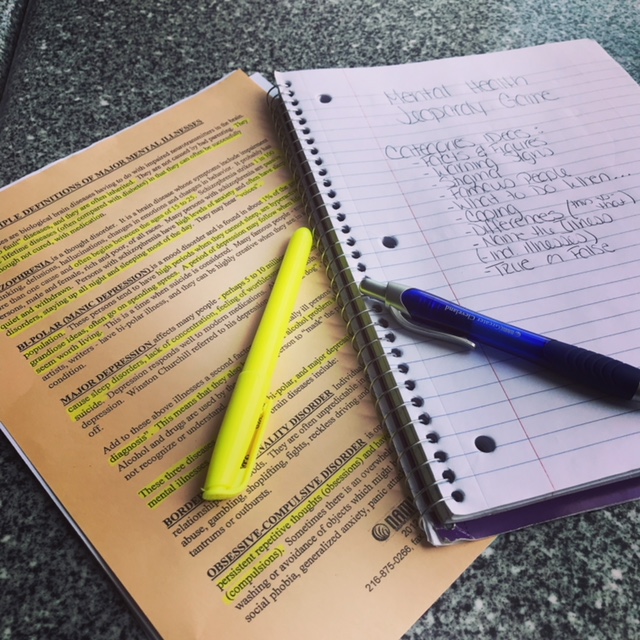 First, I hadn’t planned on saying too much. After learning about Kate Spade, I was simply going to go about sharing what I normally do about mental health, but I would focus a little more on suicide and suicide prevention. Then, this morning we learned of Anthony Bourdain’s completed suicide. So, I went with a Plan B- I made a post on a group I belong to about the discussion that is temporarily at the forefront of people’s minds. After, I closed out Facebook. I didn’t check Twitter or scroll through Facebook for the rest of the day. Today, with all the posts surrounding suicide… it was far too triggering to take the risk.

Before I get into what has been so triggering on social media, let me share… It isn’t something I have spoken about in any of my talks with NAMI. It isn’t something I try to think about on a regular basis. Scrolling through the feeds on my pages, over the past few days, has made me stare at it almost continually. So…

September 5, 2012. A Wednesday. My psychiatrist at the time and I had been working on adjusting medication. The drug I had been on, and was using as a mood stabilizer, decided it wanted to start acting as an antidepressant instead of the stabilizer. Having Bipolar, that is not a good thing. I started going up into a mania. I was in her office every other week as we were tweaking the meds and doing everything to keep it from getting worse.
I had attempted making it to the barn the week before because Zoe always made things better. She still does. Well, I had forgotten about the County Fair going on. The night I went out was the demolition derby. I made it 10 minutes before having to lock myself in the tack room for a half hour. I got Zoe in her stall and barely made it to the bus stop. Between my mind already racing faster than the cars in the Daytona 500, the derby and the people and the rides… It was beyond overload. My sister, Christine, ended up driving to pick me up because there was no way I could make it home on the bus.
Back to September 5th. I went to work just like I always did because I felt, at the time, it was far easier to pretend to be fine than to do what I needed to do to actually be fine. Each day had been getting harder and harder. That night I decided I really didn’t want to do it anymore… I was completely done. I sent a text message to my friend Diana- “You know I would never do anything stupid, right?” I had never asked something like that. The scariest part was I couldn’t trust my own answer to be a yes. Diana called because I had never sent something like that and because she was well aware of how bad things had been going. She asked what I meant, and I just started crying. Manias, depressions, mixed episodes, anxiety… I didn’t want to have to keep doing it. I was drained of everything.
Diana told me to call my doctor. It was almost 9pm and I insisted that I would be fine until the next morning. She wasn’t having any of it. My biggest fear was, and is, going to the hospital. Diana pointed out that if I called, my doctor may not make me go, but that if SHE called her, I was probably going to be going to the hospital. I called the answering service. Diana kept me occupied, and my mind busy, by texting back on forth about a tea party that we were going to be putting on for our seniors at work. She continued to keep me focused until my doctor called me.
She didn’t make me go to the hospital but MADE me see her the following day. She made sure I knew that I could call anytime that night if I needed to. Diana made sure I knew the same thing. In her office the next day, the first words out of her mouth were, “What the hell happened?”
That night… That night I wasn’t thinking about my nephews. I wasn’t thinking about my niece. I wasn’t thinking about anyone or anything other than the need for it all to be over. To not have to fight anymore. I didn’t know how I was going to complete the act. I knew that I didn’t want my family to find me in any sort of mess. I just wanted a way to simply not wake up.
I didn’t tell my parents. Or anyone else for that matter. No one ever knew how close to the edge I was that night. I don’t know that Diana even knows how close I was.

I’ve been struggling seeing all the “click to share” posts people are sharing. They’re generic posts that people share, but only to say they did their part. They added their “We really need to be talking about this” and then went on their way. Tomorrow or three days from now, sadly, I can’t help but believe that that “We really need to be talking about this” ideology will be brushed aside and moved on from. I hate feeling so pessimistic. Especially with doing work with NAMI to bring mental health and suicide in the open.

Part of the struggle comes from seeing people who never say anything about mental health or suicide share these things as if they are truly concerned. It is only 8 days after Mental Health Awareness Month ended and I have seen more suicide “need to change the discussion” threads than I did the entire month of May. The other part comes from knowing this is only coming about because two well-known individuals loss their lives. Not because loved ones struggle every day. I haven’t been able to help but feel as though the only time your battle matters is if you lose it.

So… as long as the discussion is in everyone’s minds.
What to look for:
• Someone begins giving away things that are special to them.
• Someone talking as though there is no future for them; or avoiding talk of future plans.
• Someone is speaking as though they are saying their goodbyes.
• “Joking” or casually mentions completing suicide.

What to do:
• Ask the question.
• Don’t leave them alone.
• If an emergency situation call 911 or get them to an emergency room.

Trying to describe what having a mental health struggle is like… Have you ever watched a scary movie? Think about after it’s over and you shut the lights off to go to bed or have to go outside at night. What do you do? Look over your shoulder because you are positive the boogie man or monster is hiding in every shadow. It’s kind of like that. For me, my mental illness is my monster; and it isn’t one I get to pack away in a DVD case.

Guilting someone by telling them that they are needed there or asking them if they realize what this will do to their family during a crisis… That isn’t what they need to hear; and it is far from the most pressing issue. The most important thing is keeping someone safe. Suicide is not a selfish act. It is one of finality, but not selfishness. One of the things I had been tired of was what I putting my family through with every episode.

I wholeheartedly feel the discussion around mental illness and suicide needs to change. Simply changing the phrase “committed suicide” to “completed suicide” is a step in the right direction. When the stigma, pill shaming, and misconceptions of mental illness and suicide stops the monsters that they are become far less powerful. I plan to wake up tomorrow morning with a renewed optimism. Yes, many of the people making these posts are doing it as a fleeting act with not much real thought behind them. There are, however, those that truly do want to see something being done. With the latter on our side, the monster will have a force to be reckoned with.