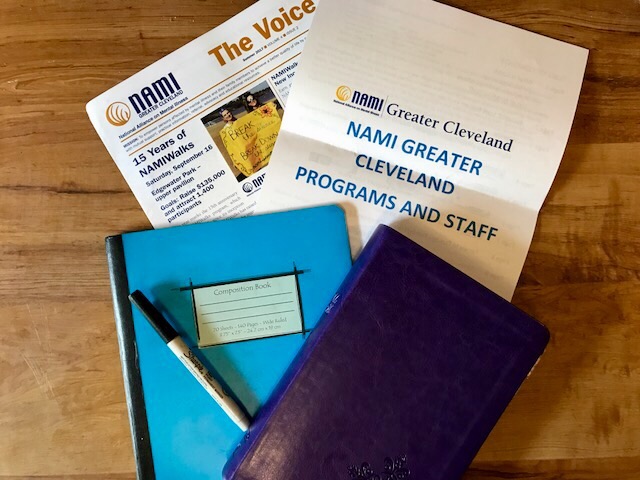 Has anyone ever read the book Cider House Rules by John Irving? In the book, as Homer is growing up in the orphanage he begins assisting Dr. Larch (runs the place among other things) more and more. I won’t go into detail so as not to spoil the story, but Homer begins to question whether or not he wants for himself what Dr. Larch does. Larch tells him over and over that he must be of use. Be of use. Be of use. Be of use. No matter where he is.

We all want to be of use. I know I do. No human being, whether at the forefront of their mind or not, has a desire just to exist and nothing else. Being of use doesn’t have to be something monumental. Each individual contributes in their own way and on their own terms. Being of use gives us a reason to wake up in the morning. It gives a sense of purpose.

A mental illness can take away more than most understand, but we can keep our purpose. We can be of use. It’s a struggle to do so some days, but the smallest pebble makes a splash. The ripple effect of multiple pebbles thrown is noticeable to everyone looking into the water.

I am officially not returning to work in the near future. It was official last Thursday. At least that was the day I felt it official (a friend brought me my stuff from my desk). I started working at fifteen; and I have spent the past fourteen years at the place I am leaving, having started there at nineteen as a volunteer. During the better part of those fourteen years the majority of my days had been spent helping people in some form. As in five to six days a week (and even seven depending) for around six and a half of those years. That’s around 2,000 days within just six years assisting with little things such as helping write out an envelope to putting on educational programs to finding information out about a Christmas Cactus.

“Not being of use” is not a known term in my vocabulary. Putting those words together makes NO sense.

I don’t know about you, but I know the days are longer when I’m not helping with something. Listless days and a I are mortal enemies. My anxiety kicks in by early evening; and that just turns in to a giant snowball- even in July. The anxiety leads to OCD behaviors and/or thoughts of despair. Leave these alone for too long and Bipolar symptoms appear.

My favorite way to be “of use” is helping others. How can I help people the most? Well, I think I’ve found it. Advocacy and education have long been passions of mine. I’d love to find work in one of them, if not both, one day. For now, I can do it without getting a paycheck for doing so. This blog, was my start. I hope those reading this can gain something from it. If it helps just one person I will be beyond happy with that.

Another step I have taken has been starting as a volunteer for the National Alliance of Mental Illness (NAMI). I started this past Monday. On Mondays and Thursdays I’m going to assist with things needing done around the office. For example, yesterday I put educational folders together for a program at a college coming up, helped categorize some things (finishing that next week), and made sure there were copies made to go to a FaithNet event this weekend. In the next few weeks I will be trained to be a presenter for their Speakers Bureau as well as a brand new program called End the Silence that goes into high schools. I am also going to talk to my pastor about bringing FaithNet into our church. The program is at no other church in the area.

… and church. As I’ve written in past posts, I have rediscovered God and my faith in this past year. If the last four months have shown me nothing else, they have shown me how important my faith is to me. Growing up I had AMAZING youth leaders- from our youth program director to Caravan leaders (a mix between Sunday School and the Scouts) to Sunday School teachers. I would love to return that. The woman in charge of working with the kids (including the 5th and 6th graders on Sunday evenings) is going to be giving me a call when she returns from vacation about helping her out.

Being of use. It is so important for our mental health. Whether it be working, volunteering, or simply individual acts that happen by chance… they all matter and make us feel good. If we sit and allow ourselves to sit back and do nothing we have allowed our Illness a major win. I know I would be handing mine a battle I’d feel like a traitor in. We may not be able to be of use in the same ways as we once were, but the new ways… the new ways are just as important.