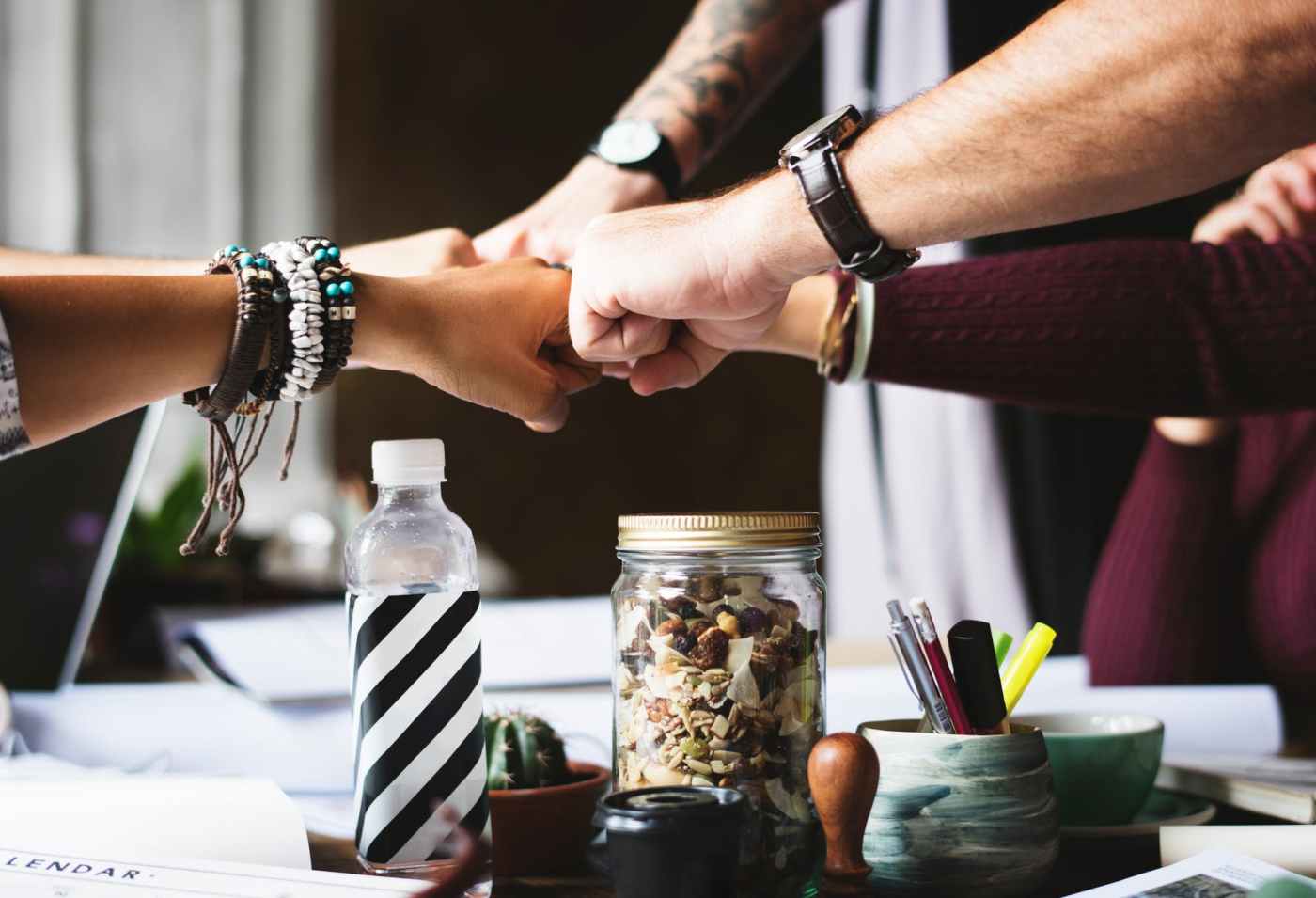 Your mental health team. One of the points I try to stress about the treatment of mental health is the importance of your mental health team. Whether that includes a psychiatrist, therapist, or both- if it consists of a psychiatrist nurse practitioner in the mix… I sometimes, even when making this a key component in every talk I give, fall complacent when taking into consideration exactly how important these people are and the impact they have on your life that extends far beyond the prescription pad.

I got to hang out with a friend, Diana, before my psych appointment this afternoon. I told her about shying away from social media as well as my beloved CNN due to continuing write ups about Anthony Bourdain and Kate Spade. Over the course of the conversation, Diana made “Not everyone has someone that is in sync the way yours are with you,” her driving sentence.

I never want to diminish the importance of having a good relationship with a primary care physician. Having a rapport with any doctor is high on the list. I also want to say that mental health professionals are human; and their patients’ minds have an illness. The same as a patient of an oncologist, endocrinologist, or neurologist. Let me start with that. Mental illnesses, just as physical illness, is unpredictable and progress differently.

With that being said, I will go on to say that the relationship you have with those on your mental health team is unlike that which you form with other care providers. These are the people you are working with to maintain stability. The ones that you work with to keep your thinking as evenly balanced for as long, and as often, as possible. The ones that you hope to have assist you in staying safe when your mind has other ideas.

And let’s face it- these are the medical professionals that are going to ask you some of the toughest questions you’ll ever have/want to answer in your life. Two examples will say it all:
• Are you suicidal? Are you having thoughts of it?
• How’s the cutting (or whatever the self-harm of “choice” may be)?

The latter is a question that I, personally, am asked whenever I have a mental health visit. Especially by my psychiatrist whom I see less than my therapist.

And then there are the follow up discussions to these questions. Take my last mania bout. It was mixed with severe anxiety and depression. All of these kicked my OCD into high gear; and when that decides to rear its dangerous side, it includes self-harm. I cut. This last time the cuts were worse than I have done in the past. The discussion that followed the two questions I listed above were necessary but emotionally draining. We go over everything from what I use to do the act to how I feel after I’m done. With the cuts being worse, my therapist was concerned about care of them, so she made me bring aftercare up to my doctor. I did. And because our sessions when this is a topic aren’t fun enough, we discussed said care- make sure to wash with soap and water, put an antibacterial cream on it (she gave me her pick), and keep them covered so they stay clean.

IMPORTANT!!! These questions and discussions are uncomfortable, sensitive topics… and ones that you have to be honest about!! Being dishonest will not help you.

After the initial crisis, the sessions will focus on the aftermath. Guilt. Repercussions. Scars- physical, emotional, mental. Where to go and what to do next.

Please don’t get the wrong idea. Visits aren’t always so intense. Today, for example, was a great one; and it was also one that I can use to emphasis Diana’s statement. Last summer my therapist and psychiatrist both spoke with me about not returning to work when my episode was over. I trust them. I know they wouldn’t have felt so strongly about it if it wasn’t in my best interest. I followed their advice- despite not wanting to. I hate not working. I loved my job. I love working. Well, towards the end of my session today [with my psychiatrist] she said, “I am so glad you aren’t working anymore. You’ve grown.” I expressed how much I hate not working. Her reply? “I know. That’s why I’m saying it. I know how hard it was for you to go in that direction; and how difficult the adjustment’s been. I’m proud of you.” She went on, after we spoke about why I hate not working and the difference people have noticed, to add, “You’re not getting buried under the pressure that you were continually putting on yourself. That’s a good thing. I promise.”

Finding a psychiatrist and/or therapist that you are able to sync with is one of the most important aspects of your treatment. When you have that relationship with them it makes life far… I don’t want to say smooth… but it makes the road a little easier to manage. When working on what to do next when a mental health crisis happens, they’ll know the best ways to treat you as well as what could be the most detrimental. For instance- One of my biggest fears has always been being put in the hospital. It terrifies me; but I didn’t want to bring it up to either of my team. Who did? That would be Diana during one of the appointments she attended with me. My therapist explained that because I let them know when I’m not doing well, because I’m willing to come in for extra appointments, and because I keep them informed that I would be at the bottom of the list of people she would consider hospitalizing. She added that because of the anxiety it would cause, it would have to be an extreme crisis for she or my doctor to send me. Each crisis now, she reminds me of that so that it is one less anxiety on my mind.

Syncing with a mental health professional also lets you tell them things without telling them things. My therapist pointed out that when I’m tense nervous I bite my upper lip. She’s able to tell how well I’m doing by my art journal pages. My doctor measures things by one of my OCD symptoms- my bookshelf.

During a mental health crisis, I feel better when I have an appointment just knowing that I will be going to their offices. I think this statement is the bottom line. If someone is in a crisis and going to their mental health provider brings about dread… If going to your psychiatrist or therapist is just a routine that you go through…

So, syncing with your mental health team. Having a mental health condition, especially a serious one, is a pretty lonely road. It can be extremely isolating at times. Having a team that you are confident in, that are confident in you, and who truly understand and know you… You don’t feel so alone. You know that at least someone can come up with a game plan when your mind decides to work for the opposing team. You have someone that isn’t going to judge you when you tell them about your cutting and have to show them what you’ve done, tell them what you use, and explain how your mind is working when the action takes place.

Sadly, not everyone finds this. And sometimes it can take longer than someone ever wants it to take. I was with the same psychiatrist for 9 years; and I loved her. I thought I was doing great! I loved going to her office for our appointments, I trusted her judgement… but we did not have the “sync” that I have with the doctor and therapist I have been seeing for four years now. I thought we did. I thought she was the only one that I was ever going to be okay with. I’ve learned far different over time.
For me, my mental health team gives me what I need to be successful: They hold me accountable. They listen. They know me; and I know what to expect from them.
Syncing with my mental health team has led to things I never thought I would accomplish:
• 3 months between psych appointments.
• 3 weeks between therapy appointments
• Setting my own goals for wellness
• I can be my own nurse when I need to be- this is still a work in progress, but I’m getting better
• Confidence
They are by my side for the struggles. They celebrate my successes with me. 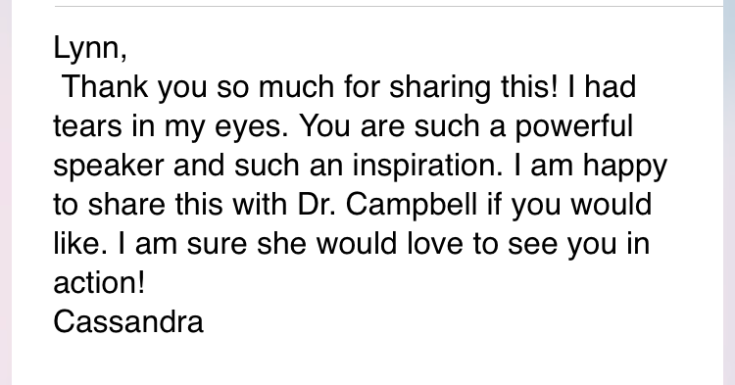